Would You Like To Ride My Paper Plane? A History Part 5

Ah, the Mighty Quo! As I mentioned before, it was pretty much de rigeur during the mid-seventies, and probably beyond that, for teenage boys to get hooked into the wonderful world of rock by the "heads down, no nonsense, mindless boogie" that characterised the sound of Status Quo, and still does, bless them. Those who grumble that they only play three chords (per song, in fairness - they do play in different keys) are missing the point. Indeed, if you need the point explaining I am tempted to wonder what you're doing reading a music blog. The Quo sound is profoundly unsophisticated, but therein lies the charm of unpretentious simplicity which runs through the most enduring rock (and roll, if you must) music, from the fifties onwards.

To my constant irritation, I never learned to play even the crudest guitar chord, but you don't need Grade 8 anything to hear that Status Quo use minimal technical prowess to move their listeners, spine first, into a happier state. The chugging boogie music, broken by occasional, (sometimes mis-judged) ballads contains the same ingredients as 50's R'N'R through to Punk, much of which is just Quo at 78 r.p.m.

I brought myself up for a while on the three albums Piledriver, Hello & Quo, plus many of the subsequent singles. I also owned a cassette of "Golden Hour of Status Quo", a compilation of their sixties material like "Pictures of Matchstick Men" and "Ice In The Sun", brilliantly parodied in the Spinal Tap movie.

Later on, like many, I "grew out of " Status Quo. Once you had the three albums and as long as they released the best tracks from later ones as singles, there seemed little point in following them closely and I was being seduced by the more complicated sound of Progressive Rock and then the ferocity of Punk. Furthermore, the first of several live albums confirmed the suspicion that a Quo gig would be little different to listening to the studio recordings at high volume. So I didn't get to see them until they opened the Live Aid concert at Wembley in July 1985. They played a cover version (Rockin' All Over The World), which was appropriate for the occasion but not one of my favourites. Later, though, just a few chords of Caroline had me transported back from being 25 years old to 14 in an instant and I suppose that illustrates one reason for my addiction to music. As a time-machine it's a lot more reliable than a TARDIS, and while the memories it evokes may not always be good, they can be rendered more accurate in an instant by the application of an appropriate soundtrack than by simply "trying to remember". 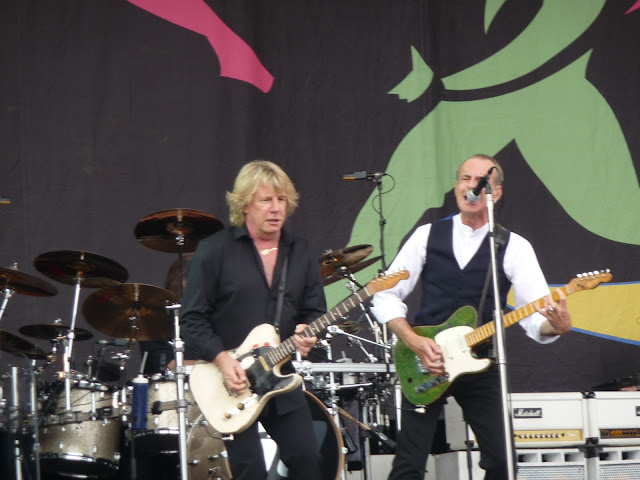 In their four decades plus, the group have seen several line-up changes, occasional acrimony, substance abuse issues, in fact all the ingredients of a "normal" career band. These are all detailed extensively elsewhere. They still release new albums and the main protagonists (Francis Rossi & Rick Parfitt) are usually entertaining chat-show participants. Several years ago they took offence at being deemed too old for BBC Radio 1. Radio 1's loss, I'd say. They tour annually and I did see their set at Glastonbury festival in 2009 from the front row. I doubt it was very different to a performance recorded thirty years earlier. Still, if it ain't broke, don't fix it.
Posted by Edward Grainger at 10:48