We Are Not Worthy... Robert Plant Live 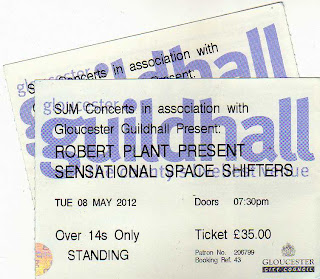 The world has little reason to be jealous of Gloucester as a rule. Del Amitri's "Nothing Ever Happens" wasn't written about the city, but it could have been. Actually, things do happen, like the filming of a Doctor Who episode, the Queen making an occasional visit or, in a few weeks time, the transit of the Olympic flame through the streets, but these are exceptional and barely noticed outside the city. Every now and then, though, our relative obscurity is rewarded, as a performer who would feel comfortable in front of an audience into five figures elects to use the Guildhall (maximum capacity 400 well-packed people) to showcase new material, groom a new band or just get back into the swing of things after a sabbatical. Radiohead, Muse and Queen's Roger Taylor have done this and back in 2009 an apparently nervous Lily Allen gave her first public performance of material from her second album in advance of the "official" launch at a trendy London venue a few days later. 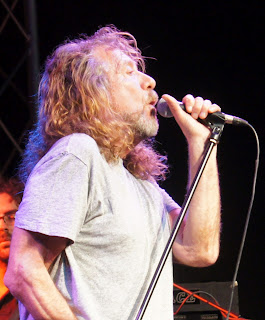 So, on Tuesday May 8th 2012 it was the turn of former Led Zeppelin singer Robert Plant to try out his new combo, The Sensational Space Shifters.

Well, I'm not sure how or even whether any space was shifted, but sensation there was. 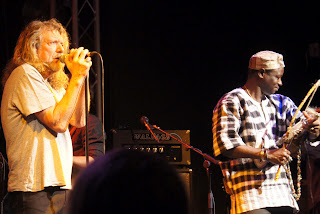 This was my third significant encounter with Plant ( http://lostinbarnwood.blogspot.co.uk/2010/10/percy-pulls-it-off.html will take you to my account of the previous one), but this was destined to be special simply by virtue of the venue. I never got to see Led Zeppelin in the flesh and my only real opportunity to do so would have been in the vast natural amphitheatre at Knebworth where "in the flesh" would most likely have meant "on a grainy video screen". At the Guildhall, though, I was barely five rows of squashed humanity back and could see the whites of his eyes. Zeppelin, as a supergroup from day one, having been conceived as the New Yardbirds, would never have needed to play a hall this small, and their notorious management would not, I suspect, have wanted them to. Consequently those ne'er-do-wells flogging surplus tickets on the web were able to ask treble or more the £35 face value. 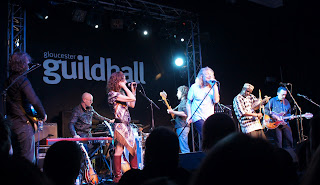 This was not a Led Zeppelin gig, however. Plant is said to be the main obstruction to a partial reformation of what would undoubtedly be a money-spinner par excellence, and from the start you could see his point. The quiet opening to what developed into a fairly heavy rock song had sophistication which LZ in their pomp would not have achieved nor, to be fair, attempted. For a start there are twice as many musicians involved, and they are not all orthodox rockers. From Plant's previous outing with the Band of Joy, American Patty Griffin remains for selected songs including one of her own, while previous collaborator Justin Adams plays guitar, often joined on an African bowed instrument by Juldeh Camara, the other half of his JuJu duo who supported on the Band of Joy tour. Unfortunately I'm not sure of the names of the other musicians, but it was no surprise to find that a further guitarist, bass player and drummer were all more than competent and the keyboard player, a veteran of Massive Attack and Portishead's live manifestations added subtle but impressive embellishments.

On a small stage already half full with their equipment, eight musicians don't have a lot of room to throw themselves around and if you were looking for something to grumble about then I suppose the necessary lack of  physicality might be one, but realistically this was a show for the ears more than the eyes. Plant is 63 years old, and has been showing off  his voice in public for 48 years or so, so you might expect the voice to be ageing with him, becoming a bit more gruff and gravelly. You would be wrong. Close your eyes (the exterior has aged more honestly) and his voice would persuade you that it is still 1969. He doesn't do as much of the protracted howling and screaming as he used to, although it's there when he needs it, but the tone remains delicate and remarkably youthful to these ears. No better case in point than his first encore of Tim Buckley's Song To The Siren, which he recorded ten years ago for the Dreamland album.

He also revisited Hey Joe from that record, but the arrangement had been tweaked somewhat. It would be an exaggeration to say that this band was all about arrangements, as there was new material (at least I think it was new), but Plant's acceptance that  people have come to hear some Led Zeppelin is tempered by a constructive effort to reward that wish on his own terms. Closest to the originals were probably the renditions of Four Sticks and the second encore, Gallows Pole, while Black Dog had been completely re-worked and Whole Lotta Love smoothed out a bit before being merged into other material. So as with the Band of Joy, while you can walk away thinking "I've seen and heard THE Robert Plant "doing" Led Zeppelin and it's true, it's only true up to a point!

What you have seen though, is a one-of-a-kind musical ensemble which on this showing is having fun, playing as a band rather than a bunch of hired hands and making a noise that is pretty much unique. The melting pot approach of spicing "straightforward" blues rock with Griffin's American country, JuJu's Africa and a bit of judicious electronica could be a recipe for an over-egged pudding, a stew with a bit of everything stirred into an unappetising mess. Clearly, though, Plant has been at this game for long enough that he knows how to cook up something special. To some extent this is achieved by stripping out different elements for different songs - probably only half the set featured all eight band members together. He referred to rehearsals in Bath, and it would be fascinating to know how that process worked. The impression is that protracted jamming has occurred from which the public are now being given glimpses of  "the good bits". Anyway, however he's done it, The Sensational Space Shifters' sound seemed quite natural rather than contrived, perhaps a reflection of a genuine band approach.

They played for just under two hours and left (to catch Newsnight according to their leader) an entirely contented audience who will take some pride in boring their mates with "I was there" stories for years to come. As the chap behind me was heard to observe "Probably one of those gigs where more people claim to have attended than the venue could ever hold". 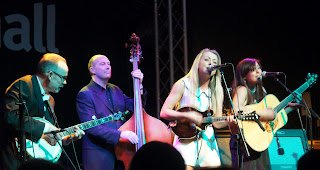 A couple of other things to mention; support group The Toy Hearts - a two-daughters-and-their-dad trio with hired hand double-bass player, whose light bluegrass and country blues were a gentle enough way to start the proceedings, while holding the audience's attention. Having seen an artist of Morrisey's stature grumble that the crowd watching him at Glastonbury were really only waiting for U2, how much more nerve racking must it be to open a show where most of the audience didn't even realise there was going to be a support and really really wanted to see the headliner?!

A mention too for the audience. In the last few years I've noticed a deterioration in the behaviour of rock crowds, specifically respect for the performance and their fellow punters. It is telling from the video of the encore that everyone was there to listen, aware that this was a one-off opportunity, perhaps, but for whatever reason able to contain any temptation to woop and bark in the middle of a quiet song. Oh that this proves to be a trend, but I doubt it... 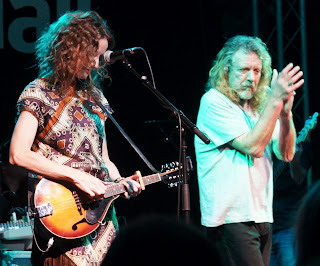 Posted by Edward Grainger at 12:26 No comments: