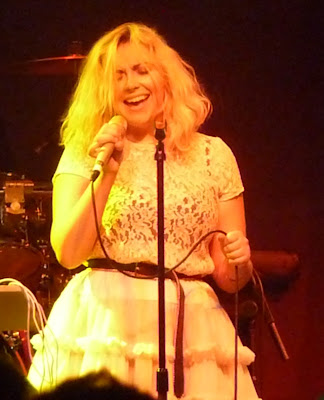 Charlotte Church is 26 years old and still deciding on a career. As a young girl, hers was labelled "The Voice of an Angel" and for several years into her teens she recorded and performed live for the great and the good, and Bill Clinton. At some point, though, she elected to turn her back on what could have been a very lucrative career in middle-of-the-road sacred/operatic warbling and plough her own furrow. She'd already made a packet, but the prospect of millions more from countless repetitions of "Pie Jesu", or recording "Charlotte Sings Barbra" for the blue-rinsed sisterhood somehow lacked allure. Supposedly she rebelled. Maybe she just grew up. Either way, she launched a modestly successful pop career with a notably catchy song "Crazy Chick", and a few years ago hosted a chat show with considerable charm and a bit of controversy. Inevitably, what with the pretty little girl turning into a very nicely assembled young woman with considerable personal wealth, she attracted the attention of the tabloid (see also "gutter") press who milked every youthful indiscretion, wardrobe malfunction or encounter with a bottle for all it was worth. That Ms. Church appeared almost gleeful, if also furious, outside the recent Leveson enquiry into press standards was hardly a surprise. Aside from that and too much publicity for the break-up of her  relationship with the father of her kids, however, she has been out of the limelight for a while. Wikipedia indicates that she released an album in 2010 before curtailing the relevant record contract the following year, but I suspect I'm not the only one who missed this completely. I therefore freely admit to buying tickets for yesterday's performance at Gloucester Guildhall out of curiosity, as it was by no means clear what manifestation of the former girl-wonder was to be on show. 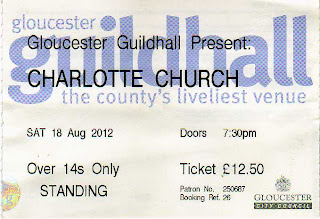 There were two support acts scheduled, but on one of the hottest evenings of the "summer" of 2012, the prospect was unenticing, particularly once You Tube snippets of the candidates had been checked out, and the Guildhall's less than wonderful air-conditioning had been discussed. True, this meant that more than half of the gig was spent in the pub, but at £12.50 a ticket this was no catastrophe, and the chance to linger in a couple of pub gardens has been a rare one this year. 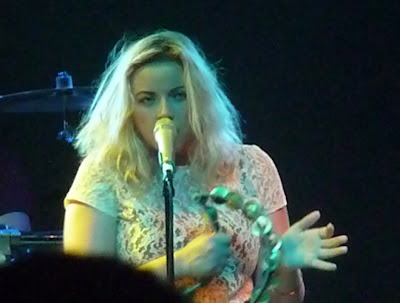 Still, we made sure we were in the Guildhall in time for the headliner at 9.30 p.m. She was not on time, but as she had been billed to appear for only an hour, this left a bit of flexibility. By now a couple of pre-released tracks from a forthcoming e.p. had given some indication of what to expect, namely rock. Sure enough, as her five-piece band swung into action and she tweaked computer gizmos on the floor to add her own backing vocals, the sound was indisputable rock. Mostly up-beat, sometimes angry and professionally executed, the songs were not, for the most part, very memorable. An exception would be "How Not To Be Surprised When You're A Ghost", a tune for which a video recently appeared on YouTube. I thought it better than the video and maybe it was telling that it was a relatively restrained song that required singing rather than shouting. One song was dedicated to the charmless former News Of  The World editor Rebekkah Brooks and it was revealed that the bearded guitar/violin player to her left was the current boyfriend (although we did wonder if this designation is changed on a nightly basis to wind-up the gentlemen of the press)! It was a fun, energetic performance of unexciting material, but there was no doubting the lady's continued ability as a singer and performer. With better material, and maybe a bit more variation within it, the rock diva badge might be hers for the asking. And she's still half my age, so plenty of time to sort it out. 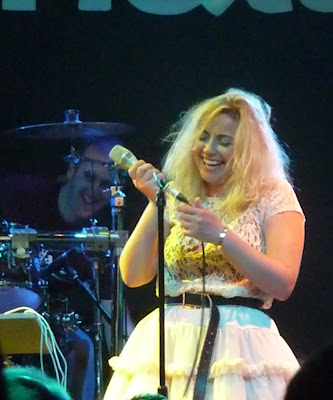 The show lasted less than an hour, which would be O.K. for a festival spot but was on the border of cheeky for a headliner. She insisted that she doesn't do encores, but filling things out with a more tuneful ballad or some familiar cover versions might have been an idea. Also, it may be considered admirably uncompromising in well established acts like Bob Dylan and Neil Young to fill a set with unheard material, but as a relative novice, albeit with an established pedigree in other styles of performance, the "here I am take it or leave it!" approach may not pay dividends. And I'm not sure I'd have chosen that outfit for her either,  but she's her own woman! 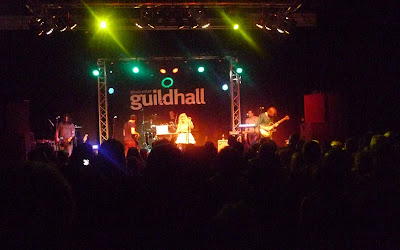 Posted by Edward Grainger at 15:02