Half Man Half Biscuit Live - They Built Their Village on A Trad. Arr. Tune!

One way or another I've been lucky enough to see a lot of the acts whose music I admire(d) in the flesh. A few notable exceptions: Talking Heads, Led Zeppelin, The Clash for a start and all those (The Doors, Hendrix etc.) who simply pre-date my being let out onto the streets. For a while it was looking like Half Man Half Biscuit, who have been around for most of the last 27 years, might number amongst those exceptions. They did come to Gloucester once, but small children and financial embarrassment conspired to keep me away, and as they barely play half a dozen dates a year, there seemed every chance that our paths would fail to cross. Most recently they were within relative spitting distance, near Wolverhampton, but my recent hip replacement thwarted me. Not very rock'n'roll, that. Still, happily a few months back they announced a booking at the Oxford O2 barn on the Cowley Road in Oxford and the tickets were booked pronto.

The O2 Academy in Oxford is just round the corner from the terrace (37 Randolph Street - no blue plaque as yet) in which I lived my last year at university, a period about which I nurse mixed feelings and indeed any visit to the Dreaming Spires has to be well justified for me to countenance it. Fortunately, once inside you could be in any malodorous dump full of sweaty overweight middle-aged ne'er-do-wells, so what's to grumble about, really?!

My trusty companion and I missed all but the last song performed by the first support act Ragged Claw, who were barely out of short trousers (gymslip in the case of the singer), but they had chosen to cover a HMHB song (She's In Broadstairs) which showed some business acumen, I thought. 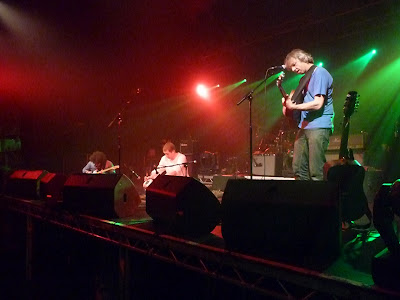 Sadly, we were in time for the whole of a mercifully short set by Sonnenberg, a trio comprising a German on guitar and vocals, a scouser on tablas and an Irishman. The consensus amongst those known to me was that they were tedious, but they have their second album out this month which is more than I can claim, so we'll just say that they weren't really my cup of tea, and wish them luck.

My expectations for HMHB were a bit confused. I own every recording they've made, I think. Certainly everything currently available. Their major selling point is lyrics which catalogue what it has been to be British for the last quarter century, with particular emphasis on the ways of the music industry and the social minutiae that bug many of us but are normally ignored by songwriters in favour of a broad-brush approach to romance and/or politics. The first of their records I bought was the vinyl single Dickie Davies Eyes, the title of which referred to a contemporary sports presenter while parodying Betty Davies Eyes by Kim Carnes. The lyric mentions the Lord of the Rings, Michael Moorcock & Roger Dean, all of whom played a part in my adolescence and I was hooked by the shared familiarity, even if my view was less cynical! The next single, Trumpton Riots, spoofed the right-on socio-political commentary that punk had introduced a few years earlier, while again using nostalgic references that are identifiably British. The "B" Side, All I Want For Xmas Is A Dukla Prague Away Kit, records the recognisable "joy" of playing Scalextric and Subbuteo at your mate's house when young with pin-point accuracy.

Since then a steady if infrequent stream of albums has recorded similar slivers of life with equal precision and consistent wit. There are moments which would qualify as poetic,although I'm not sure that their author, Nigel Blackwell, would warm to being described as a poet. Nevertheless, for example, National Shite Day from 2008's CSI:Ambleside explains how the annoyance of the crowded town centre is briefly offset by considering the worse plight of those living under Mugabe and the children of Calcutta before the horror of Primark FM returns the narrator to his own situation. "Overhead a rainbow appears - in black and white." Here is an ordinary bloke recording what it's like to be an ordinary bloke for posterity and doing it very well, I'd say.

But, while the lyrics are full of  treasure, on record the music has taken a back seat. That's not to say that they're incapable of writing a catchy tune (despite one of their songs being called Look Dad, No Tunes!), but it's those words, normally intoned in a gruff world-weary scouse that are the main point. Consequently some of the albums, particularly the early ones that were probably done on a negligible budget, suffer from weak sound quality, the music sometimes little more than a background to a spoken - sometimes shouted - rant. I had been assured by a veteran of the Wolverhampton gig that the band were really tight, but the questions remained. Could they really play their instruments and would the words be audible? I had visions of a shambolic if entertaining background noise with a vigorous tirade over the top. So, happily and not for the first time, I was wrong... 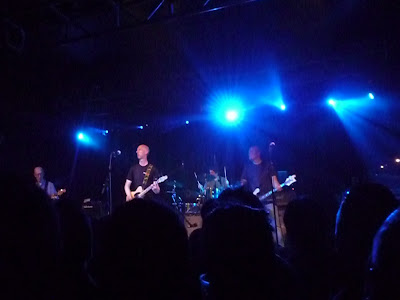 They launched into a  version of Sealclubbing from the debut Back in the DHSS album which at once indicated that the live sound was to be more musical than the record had led me to expect. It was uncomfortably loud once or twice, with some initial feedback problems, but after the settling-down period that's a feature of almost all gigs, the mix was good enough to allow at least most of the words to get through, although it probably helped to be familiar with the material. Musically more than competent and able to remember (nearly) all the words without recourse to the autocue now beloved by many a megastar, they breezed their way through a selection of nearly thirty songs, many of them accompanied by a raucous singalong from the c.500 predominantly male audience. One peculiarity was the (over)enthusiastic moshing by a substantial element, several of whom I estimate to have been the wrong side of sixty years old. So it's not just me trying not to grow up, then.

Several of my favourites were included in addition to the aforementioned Dukla Prague and National Shite Day. Running Order Squabble Fest and For What Is Chatteris? stood out, although they missed the seasonal opportunity for Asparagus Next Left.

24 Hour Garage People is a tale that allows some improvisation which it duly received, and along the way Blackwell clearly appreciated the erroneous suggestion from the audience that he was in some way associated with the vast Oxford bookstore of that name. As with any veteran band, it is clearly impossible to fit in every song that you want to hear, so there was no time for Them's The Vagaries, Four Skinny Indie Kids or Irk The Purists but inspection of the setlists on the website indicates that they do shuffle the deck a bit between appearances, a fact confirmed by m'learned friend TB. 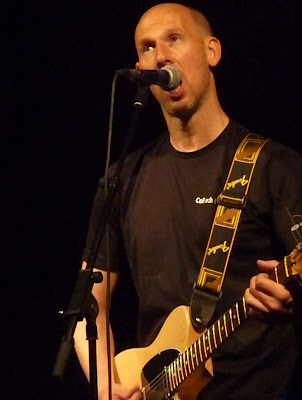 HMHB have a devoted following of which I am one, so this is not the most dispassionate review you might find, but to the converted they offer an excellent live rock performance, elevated beyond the mundane by lyrics recognised by folk more eminent than I as socially significant - and very funny. I can't make it to Leeds next week, but September in Bath is looking a distinct possibility. In the meantime, if you haven't sampled the charms of HMHB, get on with it!

Posted by Edward Grainger at 13:17